By The Development Report

Visiting Nigeria from August 20-23, the Secretary-General’s Envoy on Youth Ahmad Alhendawi met with local youth organizations and government officials to discuss the UN’s program in the country and the development of a national youth policy.

One of the highlights of the visit saw the Envoy officially endorsing the #NotTooYoungToRun Campaign, a bill that seeks to reduce the age of qualification for the offices of the President, Governor, and House of Representatives from 40 to 30, 35 to 30, and 30 to 25 years old respectively. The bill also seeks to lower the age of candidacy for the Senate from 35 to 30, and that of the State Houses of Assembly from 30 to 25.

“This campaign is important considering not only the age of the continent but also the overwhelming youth demographic in Nigeria,” said Mr. Alhendawi speaking at an interactive session with youth and government representatives held at the Federal Ministry of Youth and Sports in Abuja.

Young people meeting with the Envoy emphasized the need for further support in facilitating their participation in Nigeria’s public life, as well as tackling health issues, HIV/AIDS and youth unemployment. 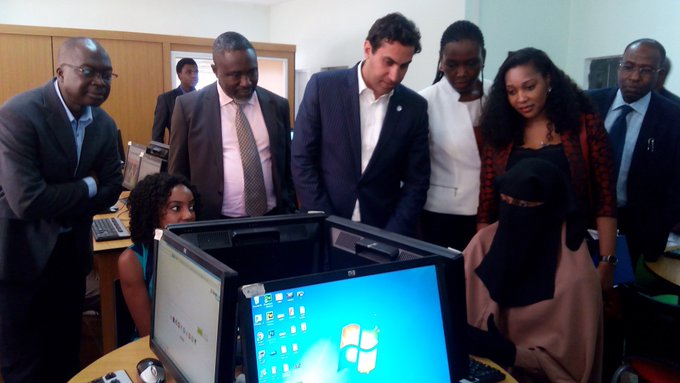 Nigeria is the most populous country in Africa and has one of the largest youth populations in the world. ILO estimates suggest that 43% of Nigerian youth aged 15-24 are either unemployed or underemployed.

In a poll shared with over one million Nigerian youth a few days before Alhendawi’s visit, nearly 70% of respondents said that employment and skills training are the issues that matter most to them, followed by education and HIV.

In his meeting with Vice President Prof. Yemi Osinbajo, the Envoy praised ongoing cooperation between the UN and Nigeria and discussed the importance of developing a national youth policy in the country, pledging the UN’s support in in that regard. Alhendawi also announced that the next UN Development Assistance Framework (UNDAF) in Nigeria will have a special focus on young people, making youth one of the framework’s key pillars.

“The framework will be developed in full consultation with young people,” Mr. Alhendawi said during the meeting, where he was joined by the UNAIDS Country Director, Dr. Bilali Camara, the UNFPA representative in the country, Ratdzai Ndhlovu, and the ILO representative in Nigeria, Dennis Zulu.

The visit of the Youth Envoty was coordinated by joint efforts of the UN agencies in the country and coordinated by UNAIDS Country Director, Dr. Bilali Camara.

COVID-19: Nigeria to Launch 38 oxygen Plants Across the Country

President Muhammadu Buhari has given the go ahead for the launching of at least 36 oxygen plants across the...
Read more
0

By IJEOMA UKAZU | ...Says Nigeria Must Mainstream Gender Following the high rate of Violence Against Women And Girls, VAWG in...
Read more
0

Christian Aid Appoints First Director Based Outside the UK

Christian Aid has appointed its first director based outside the UK. Nigeria-based Ojobo Ode Atuluku will join the charity at the...
Read more
0

Schools must be Open, Accessible and Safe from Attacks, say African children

African children speak out about how the COVID-19 pandemic tipped an existing education safety crisis to breaking point While the...
Read more
0

Day of the African Child: Nigeria Children Advocates For A Better Continent

By IJEOMA UKAZU |  "There are children out there who are vulnerable to violence, exposed to danger, forced into labour,...
Read more

COVID-19: Nigeria to Launch 38 oxygen Plants Across the Country

President Muhammadu Buhari has given the go ahead for...
Read more
0